Highway Deaths Are Highest In Nearly A Decade 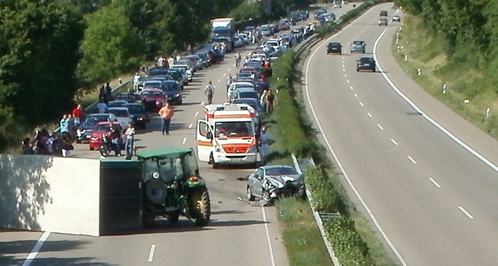 Everyone knows how dangerous the roads can be in the United States, but most of us probably assume that the problem is being alleviated to some degree year after year. We like to think that the government is doing something to make the roads safer and pass laws to eliminate risks.

The roads are becoming more dangerous than they have been in a long time.

The sad truth is that traffic related deaths are on the rise. According to Bloomberg, traffic accident fatalities in the United States were higher in 2016 than they’ve been since 2007. Citing the National Safety Council, Bloomberg indicates that “U.S. motor vehicle deaths last year topped 40,000 for the first time since 2007.”

Why Are the Roads Becoming More Dangerous?

The Bloomberg article posits a number of reasons for the increased traffic fatalities, including:

Although these causes for increased accidents make sense, the question still remains: what can we do about it?

How Can These Accidents be Stopped?

The NSC is taking a strong stand on this issue. Bloomberg quotes Deborah Hersman, NSC’s chief executive, as saying “These results underscore how our complacency is killing us.”

The NSC is calling for a total mobile phone use while driving prohibition, mandatory ignition interlock for drunk drivers and a stricter licensing system for young drivers.

If these calls to action are taken up, they would hopefully slow the frequency of fatal auto accidents.

At Yonke Law we take our results very seriously. We wear them as a reminder to honor your case. Our memberships and awards include:

With more than 20 years of experience fighting for your rights, Yonke Law has been featured on many fine stations and media outlets including:

As multiple pharmaceutical firms announce plans to move ahead with #COVIDvaccines in the coming weeks, the Advisory Committee on Immunization Practices debates the crucial question on millions of Americans' minds: When can I get a vaccine? https://bit.ly/35YZk79 #BeInformed

Michael Yonke proudly carries on the legacy of his father, the late Albert J. Yonke, known as one of the top practitioners of labor law in Missouri and Kansas, in advocating for the working class and the underdogs of Kansas City.