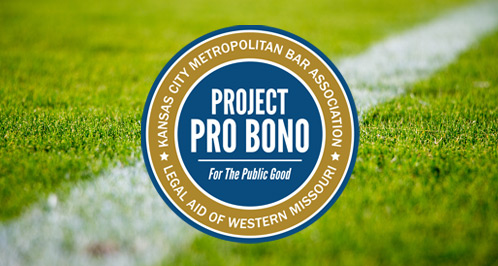 The attorneys in our area give generously of their time in a number of ways to help support and lift up less fortunate members of the community.  Many of our attorneys offer pro bono services in a variety of ways.  This nomination honors Charles R.C. Regan, who works to make the community better by volunteering his expertise for the Board of a local charitable Foundation.

The Third and Long Foundation was founded over 20 years ago by Derrick Thomas and Neil Smith, both former members of the Kansas City Chiefs.  Its purpose is to build reading interest and aptitude as well as life skills among inner city youth.  Each year the program selects 58 children and provides them with tutors, mentors and life skill experience.  Over the years none of these youngsters have been involved in felonious behavior and most go on to solid academic, military and work-related success.  The Third and Long Foundation has received prestigious awards from former President George H.W. Bush, former Governor Mel Carnahan of Missouri, and former Mayor Emanuel Cleaver of Kansas City who now represents Missouri’s 5th District in the U.S. Congress.

Charlie Regan has already spent four years on the Board of the Third and Long Foundation and has brought an invigorated presence to the Board.  Thanks in part to the generosity of his firm’s founder, Michael T. Yonke (who himself has spent over 10 years on the organization’s board), Charlie donates at least 40 hours of his time per year attending Board meetings, rendering legal advice to the Foundation and volunteering with the youth programs.

In addition to sponsoring Reading Clubs which promote literacy and a love of books, the Board is active in providing field trips for the young people to sporting and cultural events and other community related activities.  Each Thanksgiving, the Board of the Third and Long Foundation mounts in a food drive which feeds thousands of families.

The impact which the Foundation Board and its programs have on area youth were recently highlighted in a letter from one graduate.  A young woman who grew up in high-crime and low-income areas of Kansas City, and who endured physical and psychological abuse in her home, wrote to express the impact which the Third and Long Foundation had on her life.  Her comments said the program gave her “a different perspective” from the difficulties which affected her childhood by opening her eyes “to so much more.”  The program also gave her “self confidence.”  Her mentors encouraged, challenged and coached her to positive achievements – a far cry from the negative self-image she had been relentlessly exposed to from her mother and her mother’s husband.  She says through Foundation efforts she realized she could succeed and achieve.  And finally, she said her association with the Third and Long Foundation gave her love – something she had never felt in her childhood home.  She stated that, “We as a community have to pick up where others have fallen short.”

This graduate of the Third and Long Foundation was able to break the cycle of poverty and abuse.  She graduated from high school, served 8 years in the U.S. Air Force and completed two college degrees.  Today she lives and works in Washington, D.C. and travels the world to continually expand her horizons.

Entities such as the Third and Long Foundation would not exist were it not for the vision and generosity of its Founders and the ongoing ministrations of dedicated Board members.  For his energetic support of the Foundation, its Board and its young people, Charles R.C. Regan has been selected as a Pro Bono Champion.

Hon. Grate commented, “This lawyer has selected a more unique way to ‘give back’ than most of us in the Volunteer Attorney Project.  Working with one client on one legal problem is the backbone of the VAP program-making a difference one client at a time.

This lawyer is more behind the scenes and the impact is less direct, but just as important.  I have long appreciated the work of the Third and Long Foundation, and this volunteer — in the boardroom, rather than the courtroom – is making a difference in our society.  I admire this effort; this is a component of VAP that I hadn’t thought about.  I encourage more lawyers to choose this contribution.”

Charles said this of his achievement, “I am very fortunate to have the opportunity each year to serve on the Board of the Third and Long Foundation. My father Kevin Regan helped start this great Foundation over two decades ago, and I have witnessed from a young age the tremendous impact that this organization has on our community. Each year, the many members and supporters of this Foundation dedicate themselves to helping (often disadvantaged) inner-city children learn the importance of reading, education and living a healthy-lifestyle, as well as feeding poor local families during holidays when times are tough. The most important thing that I have ever learned from my parents is that you should give as much of yourself (time, compassion, help in any way at all) as you can to others in need, and that you should never pass up a chance to put a smile on the face of a person in need.”

Look for the full article in the June/July 2017 issue of KC Counselor.