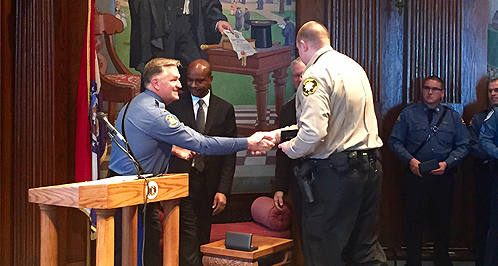 The Medal of Valor is presented to law enforcement officers as an award for extraordinary acts of bravery and heroism. Governor Jay Nixon awarded Medal of Valor awards to ten Missouri law enforcement officers who showed efforts to save lives and protect the public. Joining Governor Nixon in the presentation of the awards, which occurred in the Governor’s office at the State Capitol, was Public Safety Director Daniel Isom and Highway Patrol superintendent Colonel Ron Replogel. Senator Mike Kehoe also attended the award ceremony. Governor Nixon thanked the entire Missouri Law Enforcement community in his opening remarks, stating that there are times when it is especially important to recognize and honor law enforcement for what they do on a daily basis. He went on to say “In each of these instances, law enforcement officers receiving this accommodation clearly put their own lives at risk- at extreme risk quite frankly- on behalf of their fellow Missourians.”

The following Law Enforcement Officers were awarded the Medal of Valor:

It is important to recognize the risk these officers, and all other officers in the State of Missouri, take to protect you and your fellow Missourians. For further information on what these officers did to be awarded the Medal of Valor, see MissouriNet’s article, http://www.missourinet.com/2014/12/19/ten-missouri-law-enforcement-officers-receive-the-medal-of-valor/.