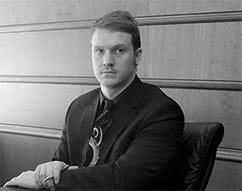 Charles R.C. Regan is an attorney who is making a difference in Kansas City. He helps people in pain by using his legal expertise to gain them the compensation they deserve.

All of his life he has seen people around him use their expertise to help those who are suffering get their lives back on track after an accident or other dire circumstance. With a father who is a well-respected attorney and a mother helping people with physical therapy, Charlie knew he wanted to follow in their footsteps.

After graduating with honors from Rockhurst High School, Charlie pursued a Bachelor of Science in Psychology from the University of Missouri, Columbia where he also graduated with honors.

Charlie continued his education at University of Missouri, Kansas City School of Law where he earned his Juris Doctor with honors. To add to the knowledge he was already gaining in law school, Charlie stretched himself and earned internships at criminal defense and civil law firms, the Clay County Prosecutor’s Office, and the United States Attorney’s Office. During his internships, he was able to gain valuable courtroom experience and use his excellent legal writing skills to write pleadings for the Government in both State and Federal Courts, which received awards.

Mr. Regan is licensed to practice law in the state of Missouri as well as the United States District Court, Western District of Missouri.

Charlie is a member of the Kansas City Metropolitan Bar Association, the Missouri Association of Trial Attorneys as well as the American Association for Justice.

Outside of the practice of law, Charlie enjoys spending time volunteering with local charitable organizations, including the Third & Long Foundation, which helps inner-city children learn to read.

Finding a lawyer with as much experience, knowledge, and motivation isn’t easy. With the passion Charlie has for helping accident victims get what they deserve in compensation, his clients get exactly what they want from an attorney.

At Yonke Law we take our results very seriously. We wear them as a reminder to honor your case. Our memberships and awards include:

With more than 20 years of experience fighting for your rights, Yonke Law has been featured on many fine stations and media outlets including:

There's a fresh snow debate in #KC –– Should you pay a fine for not shoveling your sidewalk? Area advocates are calling for change. http://bit.ly/2TJ2Rko

Michael Yonke proudly carries on the legacy of his father, the late Albert J. Yonke, known as one of the top practitioners of labor law in Missouri and Kansas, in advocating for the working class and the underdogs of Kansas City.