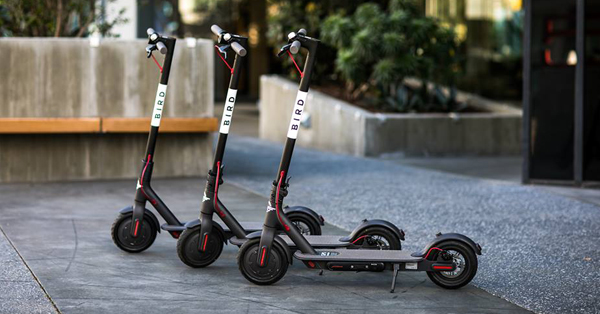 In 2018, public-transit electric scooters have been popping up in cities all across the country. Over the last several months, they have been popping up all over the streets of Kansas City. They’ve been scattered all around downtown, most notably near the Crossroads, River Market, and 18th and Vine districts by transportation rental companies, Bird Rides, Inc and competitor, Lime. If you’ve driven anywhere downtown over the last few months, you’ve undoubtedly seen people riding on them or have seen them parked along city streets, lining the sidewalks. They typically cost around $1 to unlock using a smartphone app and an additional 15 cents per minute to operate. They top out at a maximum speed of 15 mph and offer pedestrians an alternative way to move about areas of the city.

Initially, the Bird Scooters began showing up on the streets of Kansas City without permission or agreements in place with the city. By literally introducing the scooters to our city streets overnight, there has been a lag between having city rules and regulations in place for operating the scooters and people using the scooters to get around town. In late July, Bird Rides, Inc. made a six-month agreement with Kansas City that would allow as many as 500 of the scooters to be placed around town while city officials evaluated their impact. This was after Bird Scooters had already begun showing up on city streets. Lime-S Scooters started showing up around town shortly after. The Country Club Plaza was temporarily deemed off-limits while assessments were made as to if the scooters were the right addition to the pedestrian-heavy district. The scooters have since been allowed on the Plaza.

While city officials grapple with more specific longterm rules and regulations for the use of the scooters, the current interim agreement makes them subject to the same traffic laws as if you were riding a bike or driving a car. This includes riding in the streets, or in bike lanes where available, abiding by stop lights and traffic signs, and not riding on the sidewalks. Violations could result in a $40 fine plus court costs. Riders are required to be 18-years-of-age and have a drivers license. While helmets are highly recommended, they are not legally required currently, nor supplied.

So who is ultimately liable if you are in an accident while operating one of these scooters? That depends. As with all auto-accidents, the specifics of what happened will come into play. With the scooters being so new to Kansas City though, no real “laws” have yet been created to protect either vehicle drivers or scooter drivers. It’s highly likely that insurance companies will get involved if the accident involves a vehicle. The tech companies that provide the scooters have no doubt taken precautions to cover their liability by requiring you to agree to their terms of service in the smartphone apps that are required to unlock and use the scooters. As the operator of one of these scooters, it’s important to stay alert to your surroundings. Vehicle drivers and pedestrians may not be expecting to encounter motorized scooters in their path. Especially since the electric motors that propel the scooters are virtually quiet during operation. That last thing you want is to get hit by a vehicle or to run into a pedestrian.

If you have been involved in an accident with one of these scooters or have a legal question concerning them, call Yonke Law today. We are here to protect the rights and safety of Kansas Citians. Our lawyers genuinely care what happens to our clients. We take injury claims on contingency, so you will not have to pay anything unless and until we win your case. Call us today at (816) 221-6400 to schedule a free initial consultation with an experienced lawyer from our firm. It matters to us what happens to you.